Robots iPad App: Live Among The Robots with Fun

Robots have always captured our fascinations and imaginations. This new Robot iPad application can help us realize that how robots are nowadays becoming reality. Just think, robots for iPad? Is not it an extremely fun application which can keep a user engaged? This new application features the world’s most popular and coolest robots. This app is now available in the Apple’s applications store. This is one of the coolest applications available for the iPad. 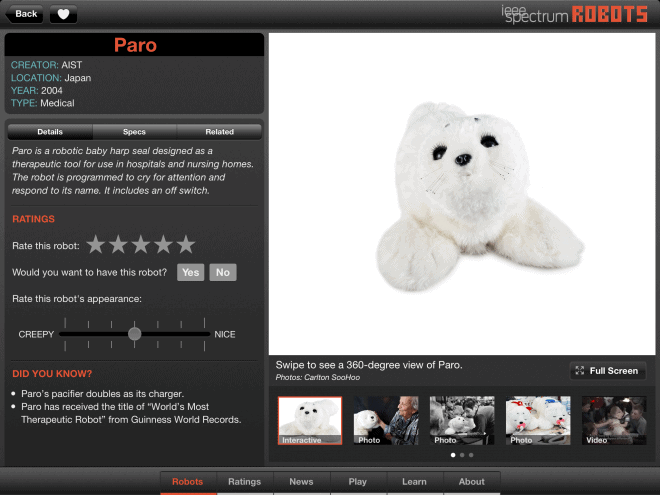 This new Robot iPad application has been developed by the Institute for Electrical and Electronics Engineers along with its publication IEEE Spectrum. This is a very useful application to know all about robots. This application is available in US $4.99. The application consists of 126 different robots from 19 countries. It has 493 photos, 42 audios and 446 videos based on these robots. Also this app is optimized for retina display. The app size is 410 MB. Also this app can run on and model of iPad including the iPad mini. There are 34 robots that are available with 360 degree view and interactive animation.

Get involved in robotics:

This new application provides a quite interactive and attractive look at the history of robotics. This robot app stands out for its ample and rich catalogue of robotic information. For the very first time in the history of apps, the users can easily find detailed specifications like sensors, dimensions, actuators, cost, and much more about the earth’s most advanced and popular robots all in one place. The app provides different profile pages for each robot. And the profile consists of fun facts about the robots, their technical details and also articles related to them. Not only the app provides flexibility to the users to learn about these robots but also allow the users to rate them according to their wish. All these ratings and votes are tallied and a list of most wanted robot, creepiest and craziest robot, and top rated robots are created.

The robot iPad app consists of the popular robots like the creepy Furby or the Keepon. The app also consists of the famous Honda’s humanoid “Asimo”. “Asimo” is NASA’s curiosity mars rover and also Google’s self driving car. This application also includes other drones, quadrupeds, androids, and snake robots. This app can off seamless and countless fun hours of entertainment and exploration for those users who are really interested in robotics.

Lifelike androids, dancing humanoids, and many toy robots can come alive on your iPad screen with the help of this new, attractive and interactive application. One can also play with these robots with the help of the 360 degree interactive features. The app can be great for all, be it a beginner in the field of robotics or a fully fledged robotics enthusiast. 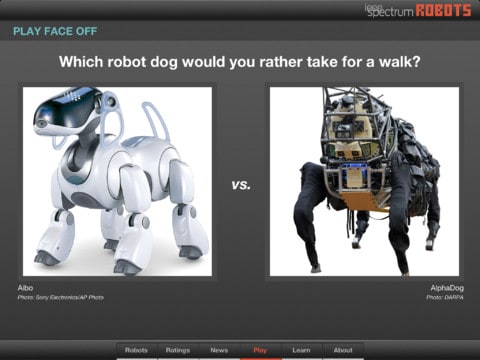 The people behind this robot app are also a part of this application. Dean Kamen, Rodney Brooks, and other contributing roboticists of the app give insights and views about their creations and also provide some good career advices for the users. You can get this Ipad Robots app from here.

It is quite sure that this new robot iPad application will provide ample of knowledge and entertainment to its users and also inspire them to involve in robotics.